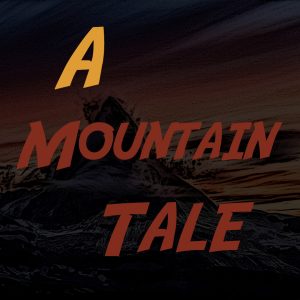 In ages past, where History gets fuzzy. The creators of this world went to war, and Gods from all across the planes came and joined them in a battle for control of a young world. When the war ended the world was left scarred and teeming with….problems. A solution was come up with, but was rejected. However, one man went ahead with his scheme.

So a mountain was created, a repository to hold evil the world couldn’t handle for all time. But what one man viewed as a blessing, others viewed as a curse. But this mountain still stands, drawing cursed souls to it. And none escape.

This story is about 4 people who by various means are called to the Mount. Magda Pichtua. Their struggles along with the many other souls who were cursed here are the crux of our story. A Mountain Tale.

The city of Khalstown is old, nearly as old as the mountain itself. A city teeming with magic but fraught with peril and apathy, it is the second thing travelers see on the mountain, assuming they get past the first thing they see. It’s white stone walls are weathered but functional. It’s double wooden gates are equally as tall at 20 feet. A city that can grow to meet the needs of as many occupants as required. Designed by powerful magic in a by gone age.

However that magic has faded over time, and the city is not as self sufficient as it used to be. The residents have to find ways to supplement the supplies needed by roughly 500 occupants. A magic shop with hardly any wares run by old Tart. A potion shop with mostly empty shelves managed by Dreana Grim Steel. A dark and foreboding smithy run by the Demon Bielzby.

This is a city of mystery and histories. The people in it all have a back story and a strong desire to leave this cursed mountain. Under the watchful of Gerty the mayor, the city survives. But hardly thrives. The coming of the four heroes will be as a storm, and hopefully be what this city needs under the shadow of the mountain.

Features: Walks like he is in a hyperbolic time chamber with gravity turned up too high, various scars from war, black braided ponytail, tusks, one bracelet, and a two handed battle axe.

Commander…former commander of The Red Word, Son of The Red Seer Hag, Ninth Orc Of Armament, Father To The Shadows and Father Of The Grave. I am the anvil to the hammer!!! Upon my words are forged into conviction, ideals into truth, burdens into purpose…. In this life I am drawn to the suddelties that once eluded me. Walking through the orchard…instead of marching over it’ s ashes. Forging friendships in place of alliances, speaking without commanding, experiencing life without a mission.

Features: Black fur with a spot of white on her nose, piercing green eyes, and an a walk that screams “Don’t mess with me.”

Minuit isn’t a stranger to danger. Having been taken in by The Family by the ripe age of 6, after much guidance and teaching by a high-ranking member, she is now considered to be one of the elites in this major crime ring. More than willing to do whatever it takes for her to succeed, one can’t help but consider what malevolent situations that might lead a young, ambitious occult sorceress to. Unafraid, and always quick to retort, Minuit is living the cat folk sorceress dream, but how long until that dream turns into a nightmare?

Features: Ill cared for hair, faded black to dark blue and pulled back in a knot on his head, a loosely wrapped cloth around his hairline. An unkempt beard, just enough to cover the skin beneath, grown slightly longer below the chin. Wearing a weathered set of scale mail, dark green metal that seems to fit a larger gnome, sadly rust and the elements have obscured many of the finely crafted details of the armor. Dark shadows under his eyes and a gaunt in the cheeks speak of ill health or recent hardships. His eyes remain bright as ever though, and a mischievous grin adorns his face.

Will suture carries different kinds of weight with him. A healers kit and a well used flick mace speak to his contrary nature. The barest remnants of a holy symbol on the handle of the weapon, obscured by time and misuse. Running a healers shop in the city of Barberton, is he a hero fallen on hard times? A vagabon just trying to make his way in the world? A criminal with just enough charm and talent to make others second guess his intentions? Or a mixture of all three. Somewhere on the Mountain, in the mist, lies the answer.

Features: Pristine plate armor that gleams in the sunlight, polished to a high sheen with a shield to match. Brown hair with a strong jawline, Arthur is the proto-typical visage of the handsome knight. But his eyes show a kind of empty sadness that his steady smile belies.

Arthur’s childlike attitude and different approach to situations make him a unique addition to the group. Arthur doesn’t seem to follow the traditional mold of a Champion, he follows his heart. Sometimes this helps a situation, sometimes it gets him into trouble. His memories are foggy from before the mountain. A familiar face haunts him, a women he knows he loved more than life itself, and who loved him. Something happened to her, but he knows shes here….on the mountain…and Arthur will move Heaven and Earth to find her.

Features: Lotti is a halfling, her skin darkened and weathered by the sun and the elements. Her green eyes reflect the colors of the forests that she loves so much. Her strong hands tell of hours spent caring for the land. Her eyes tell a story of survival. However, even though she’s clearly experienced pain and troubled times, a kind smile often rests on her lips. Her closest friend, Koty, is usually found perched on her shoulder. The leshy is a tangled mass of tiny vines, a cracked acorn covering what would be his head. His red eyes peek out from the cracks.

Lotti is always quick to help someone in need. She has strength and power where others do not and chooses to use that to everyone’s advantage, not just her own. Before she came to the Mountain, she trained as a druid, honing her magical skills. On the Mountain, she has done a little adventuring and been a guide to any who need it. She delights in hearing the stories of others and will gladly share her own in return. The world is a place to be respected and learned from. She created Koty shortly after coming to the Mountain, and together, they’ve made even more stories than she had before.

Features: Nex remembers little of his life when he was alive. A woman in ranger gear stroking his cheek as a youth. A shady looking man with a quick grin teaching him knife skills, and how to rob a tomb or ruins. Most of the memories are gone. Clearer are his memories leading up to the crusade. Being a fixer for the army and more importantly the Queen’s Advisor, the Wizard Dwemerlin. Despised by the elite of Albalon, he survived anyway he could.

After the battle of the Iron Plains, Vex died, and was reborn as a wandering undead. Clad in his original armor, battered and ancient, he wield a powerful magic spear and spiked shield. For Millenai he was walked through a fog of time and memory. For millenia he sought a way into the Giant castle to end his cursed existence, with the coming of living heroes….is this his chance?

Features: Thame has lived independently in the woods outside of Khalstown for the last thousand years or so. She is always willing to face danger head on. Her first adventuring party devolved into constant arguing and bickering, so Thame left to be on her own. When she finally returned to check on her former companions, Thame found them all slaughtered under mysterious circumstances. To his day she is wracked with guilt and the feeling that she was meant to die with her friends. Though she never admits her fears.

Gerdy the Mayor, a blonde elf with a sing song accent, she plays her past close to her chest. The defacto mayor of Khalstown, she does her best to protect and serve the people of this strange sleepy town. But there is more going on than meets the eye always on the Mountain.

Dreana Grimsteel, a dwarfess with mastery over potions and alchemy. She came on a quest of he rown, but did she ever complete it? Wife of Gerdy, she runs the potion shop. But supplies have been limited, and she wonders where they will get the ingredients needed to help the people of Khalstown.

Tart the Wizard, or Tarnathica Ebonyfeather A Tengu wizard who’s main area of expertise is the past. Cursed to the mountain for finding and reading an ancient scroll. He was studying the ancient civilization of Albion, it led him here, to the mountain. He runs the magic and scroll shop. Though his wares have little use for the common folk of Khalstown, perhaps the heros can make use of them better?

Bielszby is the town black smith, and more importantly, a Demon. He has knowledge of the Mountain he is not willing to share, and presents himself as a being who has been on the Mountain a long time. A smith of incredible skill, he plys his trade in Khalstown simply out of boredom. Maybe the NPC’s can fan the flames of interest, like a forge gone quiet.